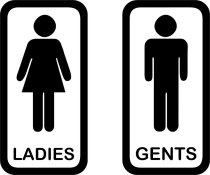 he safe schools program. As he spoke about issues of gender and identity I saw as he expressed his fears  something that gave me reason to pause.

His fears in regard to accepting transgender people was expressed as a concern about people using the wrong bathroom or shower block and the lack of safety this may cause . Hidden deep in this concern is something that worries me deeply, the suggestion here is  that the only thing that is preventing possible violations occurring in these vulnerable places is that fact that walls keep one sex from another. This highlights for me an entirely flawed way of working through what might be a major social problem.

It seems to me that  as a society we are seeking to prevent violations against women by creating safe places and procedures for women, which seems to suggest that the fact that men will violate women is a accepted  part of of our social structure and without physical or legal barriers men will not be able to resist inappropriate  behavior. It seems that our Australian social structure wants  to be able clearly define Men and women in their roles so we can know who needs protection and who does not. After each occurrence of gender violence erupts in the media there are calls for women to stay safe, advice about how to reduce risk by avoiding unsafe places or practices, as if men have no choice  or that given the opportunity all men would violate. I also hear the cries of indignation from other men saying ” not all men” spoken from hurt posture of defensiveness.

I believe that men must be  more than their instinctive reactions, that we are given the ability to reflect on our actions and choose from a variety of responses.  When we make the wrong choice however (which is only Human) we can admit it and face the outcomes produced.  Perhaps rather then reacting with fear or hurt when confronted by the behavior of some men it would be better to listen and look for ways make men as a whole better rather then increasing controls and security over women.