It started out as what I thought was a simple post on Facebook. I had taken a selfie and noticed that during my holiday my lazy stubble had become a beard. I decided to pose the questions to my friends about whether 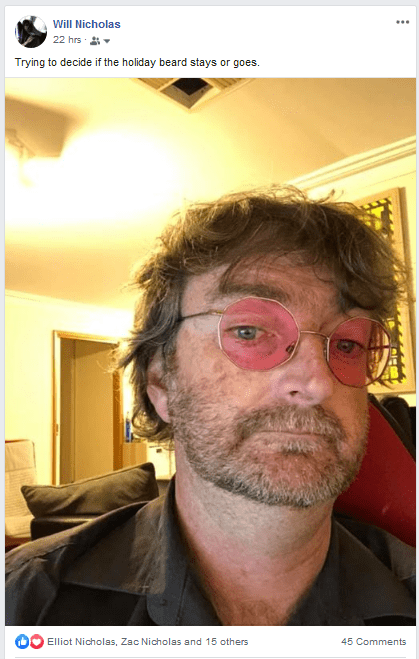 it it should stay or go. I thought perhaps I might get a comment or two about the streaks of silver grey that now flecked what was a once uniform beard in my younger days, I was however unprepared for what followed as my the diversity of my friend community began to reveal itself.

Social media can be a frighting place to ask questions about ones identity and in particular ones appearance. It is not a place to enter into lightly even if one is reasonably happy and comfortable in ones own skin.

The first few posts were fairly light hearted with advice about different kinds of razors and treatments for keeping and removing the beard. There were also the usual comparisons with celebrities that are often more about my glasses than my facial hair. Some offering approving support for my new chin adornment while others clearly not ready for the change.

The first sign that the Facebook thread was going somewhere unexpected as a comment that read “If your Dad doesn’t have a beard, you’ve got two mums”. Odd I thought but quickly dismissed it as an anomaly or and in-joke I didn’t get . Some of my other friends questioned the hetero-normative tone of the comment and the thread moved on.

Soon after however  a meme appeared in my thread from a different friend, one not connected to the first. I did some interest research and discovered that an Australian band called the Beards  had released a song a few years ago with the title “If your Dad doesn’t have a beard, you’ve got two mums”. The lyrics of the song tell the story of a young man who is taught to shave by his smooth faced father  and calls into the question the masculinity of the father because of his shaving preference. The film clip was even more dramatic  with a task-force of hairy faced men liberating the young man from his non hegemonic masculine father to take him out to play some sport and drink at a bar. A little further down the thread another friend shared the YouTube music clip:

Now I understand Australian satirical humour and I suspect that this band was tapping into a certain type of male identity but I found myself reflecting on the ways that this view of men is inconsistent with my personal stand against misogyny and gender role stereotypes. In fact my desire to enact male/female load sharing and breach hegemonic masculine family structures might have now become the best reason for removing my beard. The lyrics of the song and the supporting video clip disguise an attack on alternatives to toxic hegemonic masculine and in this case the beard seems to be symbol of this position.

The idea that shaving in this narrative called into question a mans masculinity even in jest made me cringe. Not to mention the implication that there is a hierarchy between mums and dads and that children in non hegemonic masculine families need to be rescued by a gang of hairy men so they can man up.

Was I over reacting? My Facebook friend Jury seemed to be split on the issue resulting in  an exchange of ideas that was largely civil and curious in nature sharing articles and opinions about  male and female identity and gender roles. I dont know what the long lasting outcomes will be but I guess it was good for us all to be out of our echo chambers for a bit. Happy to hear your views here in the comments.

as for the beard… I’m still undecided perhaps ill leave it for a bit longer and it will grow on me.